The blazing star tells V about her experiences filming the chart-topping series and her life-changing adventure of embodying Sarah Cameron.

The blazing star tells V about her experiences filming the chart-topping series and her life-changing adventure of embodying Sarah Cameron.

For Madelyn Cline, acting provides an unrivaled catharsis and inhabiting the intricate psyche of the quick-witted it-girl Sarah Cameron in Netflix’s Outer Banks served her with a mental purging like no other. “It was almost like a therapy session in a way,” the 22-year-old starlet explains. “With Sarah, I really started with her insecurities because one of her core [attributes] is this whole insecurity she has about getting close to people. I really had to dive into that, and ask myself, ‘What does that look like for me and how do I find my truth in that statement?’” As a main player in the young adult series, which follows several, young love affairs and a legendary treasure hunt amid a class-divided society, Cline relished the chance to challenge herself both personally and professionally through taking on the role, not only performing psychoanalysis on herself, but even going so far as to spearhead her leading character’s original development.

Upon initially reading the script, Cline recognized a complacency with Sarah’s one dimensional and untouchable aura in the first draft and sought to add a lovable factor to the then-standoffish, rich girl’s personality before filming. “I really wanted there to be something about her that was endearing, something that made you feel like maybe she doesn’t quite belong in this world,” she says. “I wanted to add some depth and some quirkiness to Sarah to make her feel not so stereotypical.” Fortunately, showrunner Jonas Pate encouraged creative collaboration between the show’s writers, producers, and actors throughout the series’ entire production, so Cline’s desired vision for Sarah was welcomed wholeheartedly.

After proposing an elevated, multi-faceted Sarah to the Outer Banks creators, Cline discovered that the writers had similar plans to differentiate her character from the privileged, upper-class constituency, otherwise known as the Kooks, she’s forced to associate with. “We were all on the same wavelength and they told me, ‘We trust you and we want you to run with this.’” With guidance from the show’s leading executives, Cline had the virtual liberty to craft her own rendition of Sarah, one that pleasantly strays from the typical queen bee archetype and instead offers an adventure-seeking free spirit that incorporates aspects of Cline’s own personal identity. In preparation for the role, Cline approached Sarah with a gracious level of empathy. “I think there are a lot of insecurities that I saw in Sarah that I was able to recognize in myself,” she says. “It was cathartic because it was a way of exploring those insecurities and it’s almost like I was giving advice to myself and telling myself that it’s okay to feel these things.” In entering her character’s delicate mindscape, the budding actress was able to mentally illuminate her own life experiences for inspiration; however, when it came to Sarah’s specific, plot-related turmoil, Cline’s raw acting talent was ultimately put to the test. “For heavier scenes, you could catch me sitting in a corner and crying just trying to get in the headspace,” she explains of her craft. “Especially for a lot of the later scenes in the show, I really had to create the betrayal and the pain that Sarah was going through in those moments for myself.”

Sarah’s character development finds a focal point in her romantic endeavors, and one particular relationship with John B, a daredevil Pogue (the coined name for the working class) played by Chase Stokes, provides an eye-opening turning point for the young lover. Paramount to the show’s success, Cline attests to her and Stokes’ dedicated preparations for portraying their love affair as authentically as possible. “Our goal from day one was to really sell John B and Sarah’s relationship,” she says. “We really had to start at our own friendship and find that friendship in John B and Sarah for the love story to sell.” Ahead of stepping on set, the two stars formed a fortuitous bond off-screen in order to relay a realistic relationship when the cameras started rolling, and it certainly paid off. 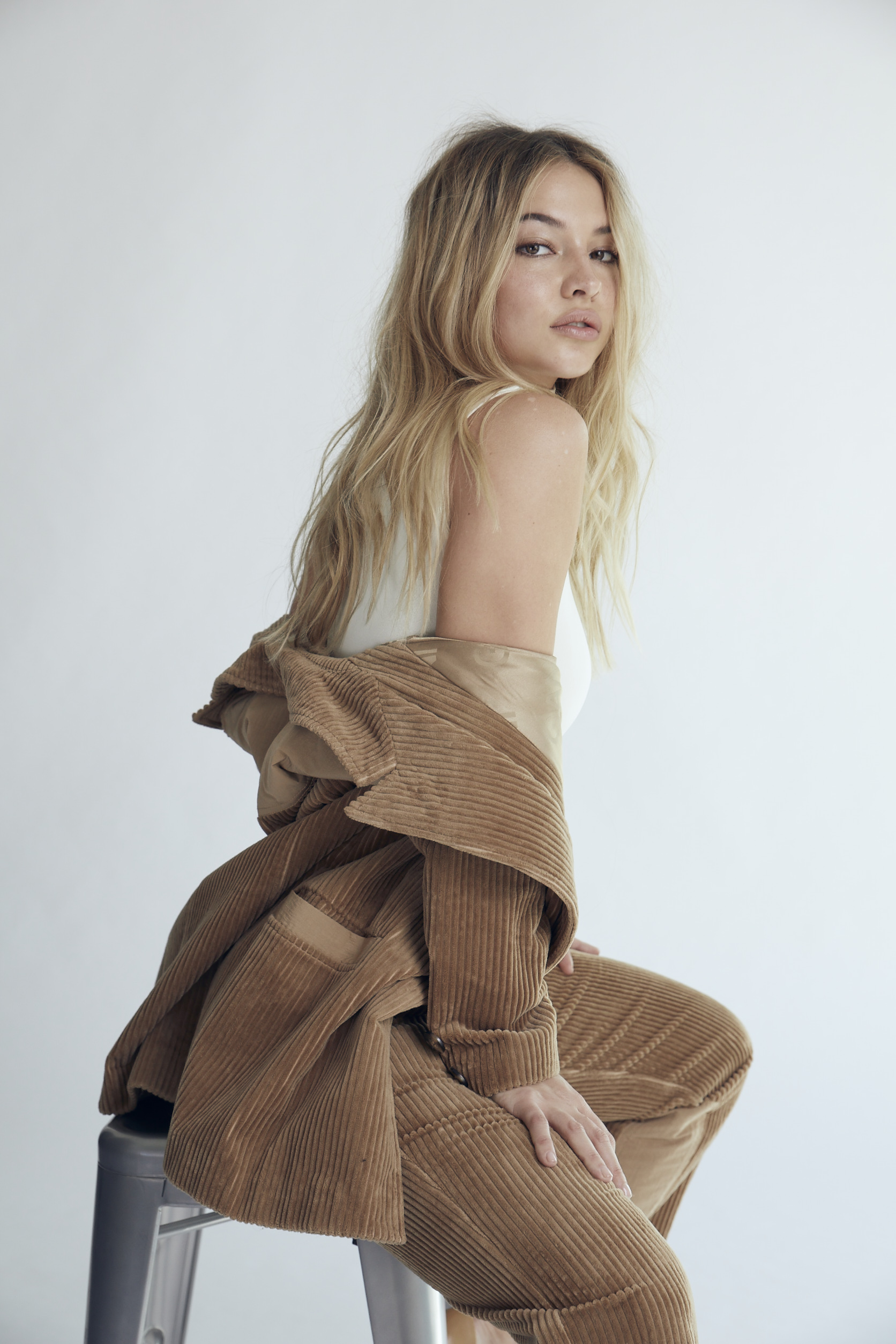 Looking back at her masterful contributions to Outer Banks, Cline hopes that the series will help erase prejudice towards society-dividing labels. “We obviously deal with class issues with the Kooks and the Pogues [in Outer Banks],” she explains. “For me, the biggest thing with the show is transcending those labels, and Sarah’s journey bridges that gap.” Forging meaningful relationships outside the town’s restrictive class system, Sarah proves that factors of wealth and occupation are irrelevant in true, human connection, a lesson which epitomizes Cline’s intended overarching messages. “I think the real matter transcends the show,” she says. “You know, not judging someone based off of who they are, where they live, who their parents are, their skin color, their sexuality—that’s what I hope people draw from the series.”

On a more personal level, filming the show on location in Charleston presented Cline with an overwhelming, full-circle sensation, one so euphoric that the actress actually gained a newfound appreciation for her hometown in South Carolina. “I think personally, I fell back in love with where I’m from, Charleston,” she says. “Shooting a show and a love story in that whole ecosystem with the most amazing people, our cast and our crew, I fell back in love with that area because I was so in love with the project.” Having dedicated her entire being to Outer Banks over the last year, Cline’s passion for the show has surpassed a metaphysical level, one so deep-rooted that she’s taking her goals with the show’s impact one step further for universal, environmental advocacy. “I have a lot of love for that ecosystem,” she says. “A huge thing for me is our environment. It’s not called the low country for nothing, it’s literally at sea level. If we don’t start paying attention to conservation in our environment, the water levels are going to rise and those areas are going to start disappearing.” An advocate for a healthier Earth, Cline recognizes that South Carolina’s ecosphere is only one of a million places in need of more tender care, but she hopes that the show’s beauty and the location’s sentimental meaning will inspire viewers to start treating the environment with a heightened level of respect. “The show is beautiful because of our location,” she says. “But it can’t be beautiful if it doesn’t exist.” For Cline, utilizing her newfound platform to advocate for protecting and improving the world’s natural beauty is at the forefront of her philanthropic endeavors.

With the series’ roaring success, Cline grounds herself in her ultimate life goals. “Whatever I want to do, I want to make a difference,” she affirms. “Whether it be to five people or five thousand people, I want to try and make a difference. Whether that be starting conversations about environmental conservation or taking part in being a voice for people who don’t have a voice, I just want to help people however I can.” Showcasing her encapsulating acting abilities as Sarah Cameron on Outer Banks, rising star Madelyn Cline is not only proving herself a master of her craft, but also defining herself as a change-maker for the world’s next generation. Setting an example for young viewers, Cline’s impact transcends that of her on-screen performance; with the world now at her fingertips, Cline is stepping into the spotlight as both an actress and a role model, and she’s exquisitely utilizing that newfound platform to inspire positive change in modern society’s conflicted climate and propel forward messages of self-love and respect for her audience in today’s connected world.

Get Creative With #MiuMe
It’s time to show off your personality, and vintage Miu Miu, during quarantine.